Mr. Parker teaches History at McDowell Academy for Innovation.  He originally taught Elementary School and decided High School was where he wanted to be.  We are happy he decided to make that change.

Mr. Parker attended college for his undergrad studies at Appalachian State University and graduated with a 3.6 GPA. He received his Master's Degree in Elementary Education from Gardner-Webb University with a 3.8 GPA.  He is also a United States Veteran in the Air Force.

Interestingly, Mr. Parker originally attended college to become a preacher.  Later, he decided he wanted to teach history. He chose to teach history because he wanted to understand the Bible more in-depth.  He believes in classical education, and his love of history naturally evolved into a love of teaching. His passion and expertise in history is very evident when you talk with him about world or historical events.  His love of the subject allows him to pass this passion on to his students who learn that History is so much more than memorizing dates from the past. History comes alive in his classroom.

Mr. Parker enjoys playing golf, reading, and fishing.  He is quite the golfer and hits the tees almost every weekend.  One of his biggest passions though is reading. He always has a book at his side, and he has read thousands of books on various topics from spirituality, religion, history and the Bible.  Ask him about his collection of rare and obscure books he has collected over the years. His favorite author is Graham Hancock and many other non-fiction authors. He only reads non-fiction because he feels like if you are not learning something when you read, you are wasting time.

Mr. Parker has lived his whole life in North Carolina, except when he was he was stationed in New Mexico and Texas for several years while serving in the military. He loves all kinds of music from classic rock, grunge, southern rock, Frank Zappa, folk music and bluegrass. Thanksgiving is his favorite holiday because he loves to eat good food. He also enjoys Italian, and Mexican food.  His favorite movies are Animal House and any Monty Python movies.

As you can see, Mr. Parker is a well-rounded teacher who loves to share History and help it come alive for his students.  His passion and drive to help students is very obvious if you ever see him in action. Catch him on a Friday, and you will even see he is quite the snazzy dresser too.  Think pink golf jacket, tie and Chuck Taylor’s. We like that side to his personality the best. 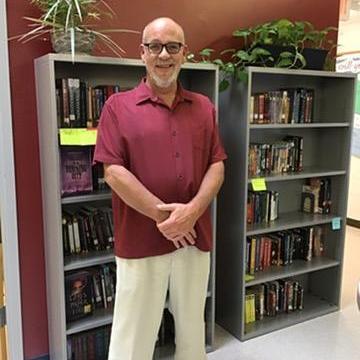